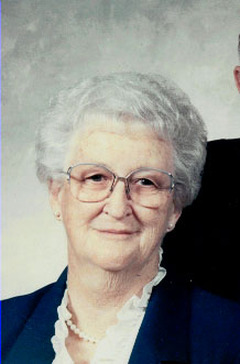 IdaBeth Ward Denton, 90, passed away from natural causes on Tuesday, November 3, 2015. She was born in Treasureton, Idaho to Richard Alonzo and Hazel Campbell Ward. She grew up in Treasureton where she still lived today. She went to a small Treasureton School with her older brother Robert (Pete) Ward and her younger sister Colleen (Brig) Olsen. Her father nick-named her "Bill" which stuck with her all her life.

After 8th grade she had to board with people in Preston to be able to attend high school and graduate. She married Malcolm Dane Denton on May 11, 1943 in Gilmer, Texas. After the war they were sealed in the Logan LDS Temple. They bought the ranch from her parents, and they raised three boys Richard (Nancy) Denton, David, Andy (deceased, wife Alta) and a daughter Loma. A second daughter Annette, died as an infant.

IdaBeth served in many LDS callings as Treasureton was a small ward and everyone had to put their shoulder-to-the-wheel in many organizations. She was an excellent home-maker and supported the activities of her children and husband. She worked for the Franklin County Fair Board for several years as a supervisor over the quilt entry department, and was often an election judge.

She collected hundreds of her ancestor's personal histories and pictures, and was generous to share them. She loved temple work, serving Spanish Name Extraction Missions, working in the Genealogy Library in Preston and doing Family Search indexing. She was a member of the Utah Daughters of the Pioneers, Lone Pine Camp, and made dear frineds who shared a love for heritage. She left a legacy for Treasureton and its families by collecting and publishing a 614 page history book with stories, pictures and records of schools, homes, the cemetery, veterans, missionaries social events and good stories of pranksters from every generation.

Special thanks is given her loving neighbors and friends and to the staff at the Heritage Home and the nurses and staff of the Franklin County Medical Center.

Funeral services will be held on Monday, November 9, 2015 at 11:00 a.m. in the Riverdale 2nd Ward Chapel 3642 North 1600 East in Preston. A viewing will be held on Sunday from 6-8 p.m. at Webb Funeral Home, 1005 South 800 East in Preston and Monday from 9:30-10:30 a.m. at the church. Interment will be in the Treasureton Cemetery. Memories and condolences may be shared with the family at www.webbmortuary.com

To order memorial trees or send flowers to the family in memory of IdaBeth Denton, please visit our flower store.
Send a Sympathy Card