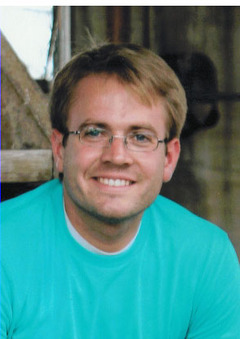 Ian Dauntes Porter, 29, passed away Saturday February 20, 2016 at his home in Preston, Idaho. He is survived by his loving wife (Heather Kristina), two beautiful daughters, (Xandria Denise and Maizlynne Kristina), and loving family.

Ian was born July 8, 1986 in Preston, Idaho, as the oldest of five children, to Dauntes and Michelle Porter. Growing up, Ian was full of energy and was a quick learner. He was very adventurous, creating inventions, constructing forts and contraptions, and exploring the Cub River Canyon with friends and siblings. He set the bar in school for his siblings because he was so bright. He was also very attentive and protective of his siblings throughout their growing up years and into adulthood.

He graduated with honors from Preston High School where he developed his passion for ballroom dancing and he was known for his quirkiness and a mop of curly hair. After high school he attended Brigham Young University-Idaho where he continued to enjoy dancing. He thrived in the dance world so much that he had the opportunity to intern as an instructor at an Arthur Murry Dance Studio in Santa Barbara, California. He later served as a missionary for the Church of Jesus Christ of Latter-Day Saints in Knoxville, Tennessee from 2005-2007 and then returned to BYU-Idaho where he studied electrical engineering. Shortly after returning from his mission he returned to his high school employment at Big J’s, where he met and was one over by Heather (Ericksen). On June 14th 2008 they were married in the Logan LDS Temple. Ian and Heather enjoyed many activities together especially snowboarding, ice-skating, and traveling to St. George, Utah. The happy arrivals of Xandria and Maizlynne followed amidst fun adventures and Ian’s hard work to provide for his family. Ian was playful with his girls and loved and appreciated Heather deeply as his wife and great mother of their two girls.

Ian was a valued employee of Big J’s and the Utah State Space Dynamics Laboratory. He valued being able to contribute meaningful work and to share what he was working on with others. He also, took seriously, the opportunities he had to serve in the Church. He was known by those he worked with as hard working, fun, and quick-witted. There was rarely a dull moment when Ian was around.  He was quite a tease and loved to challenge conventions and opinions. Ian was a grill-master, enjoyed cooking, and good food. He was known to have projects, creating and building a variety of things, such as furniture, decorations, and a doll house for his girls. His passion for his faith, games, movies, reading, and politics lead to great discussions and often the betterment of others. He was creative in coming up with schemes or fun things to do and was a persuasive leader that encouraged others to enjoy themselves and have a good time. Ian was a devoted son, loving father and husband, and a protective and exciting brother.

Funeral services will be held Thursday, February 25, 2016 at 11:00 am in the Preston North Stake Center, 310 N. State, Preston.   Friends may call Wednesday from 6-8 p.m. at the stake center and Thursday from 9:30-10:30 a.m. also at the stake center. Interment will be in the Mapleton Cemetery. Memories and condolences may be shared with the family at www.webbmortuary.com

Thanks to all who have shown their love and support throughout the years and during this time.

To order memorial trees or send flowers to the family in memory of Ian Dauntes Porter, please visit our flower store.
Send a Sympathy Card