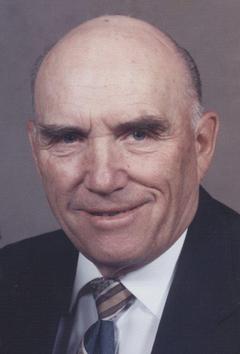 Beloved Father, grandfather and great-grandfather, Hyrum Ray Gibbons passed away peacefully May 27, 2016 at the Legacy House in Logan.

Born into a loving family on Sept. 6, 1918 in Logan, H. Ray was the son of Hyrum and Claudia Johnson Gibbons.  He grew up on a farm in Logan where he learned to love the land and the hard work it required to make it productive.  He graduated from high school in Logan and later met the love of his life, Amy Schiess.  They were married in the Logan Temple on Jan. 16, 1941.  Ray and Amy moved to a farm in Lewiston in 1942 where they have lived ever since and where they raised their five sons and enjoyed a wonderful life together.

H. Ray was always an active member of the Church of Jesus Christ of Latter-day Saints and served in many leadership positions in the church.  At a young age, he was called as a Bishop and later served as a member of the Benson Stake Presidency, Regional Welfare agent and as an ordinance worker and sealer in the Logan Temple.  He loved missionary work and over the years sponsored many missionaries both in the family and in the ward and stake in their missionary service and always contributed to the General Missionary Fund of the church.  He was greatly respected by all who knew him.

His service also extended to many agricultural and civic groups.  He served many years on the boards of the Cache Valley Breeders Association and also with Select Sires, a national breeders association.  He also served on the Cache Valley Dairy Association Board of Directors and helped to form Federated Dairies, Western General Dairies Inc. that had the brand name of Cream O’ Weber.

With several other businessmen, he formed Mountain Shadows, an investment, property management-brokerage group responsible for developing many properties throughout the Cache Valley including the buying, salvage and eventual sale of the Amalgamated Sugar Factory in Lewiston to Presto Products and donation of a portion of that property and water rights from Mountain Shadows ownership to Lewiston City.

His heart always was tied to the farm and dairy.  He successfully farmed and built a very successful dairy operation with his brother, Don, from 1943 to 1978 when the dairy and farm was divided between the two families and he then sold his farm to his sons, but never stopped working with them and enjoying all of that his farm and dairy offered.  While dairying, he received many awards and recognitions; Distinguished Holstein Breeder, Service to the Dairy Industry, Oldtimers Award and many trophies and ribbons won at Dairy Cow shows and State and County Fairs.  As trustee, he managed the original family dairy on the South end of Logan and the “Cliffside Area” farm owned by his father, Hyrum Gibbons.  He worked with several developers to develop those properties and donated the water rights associated with them to Logan City.

Funeral services will be held on Friday, June 3, 2016 at 12:00 noon in the Lewiston Second Ward Chapel, 1600 W. Center, Lewiston, Utah with Bishop Paul Thacker conducting.  Friends may call Thursday from 6-8  p.m. at the church and Friday from 10-11:30 a.m. also at the church.  Interment will be in the Logan City Cemetery.  A special thanks to the loving staffs at Legacy House in Logan and Access Hospice for their loving care of our father. Memories and condolences may be shared with the family at www.webbmortuary.com

To order memorial trees or send flowers to the family in memory of Hyrum Ray Gibbons, please visit our flower store.
Send a Sympathy Card