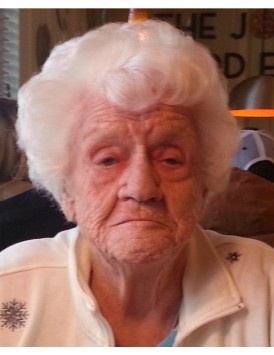 Gwen Ellen Elwell Jordan, 99, passed away September 26, 2020 at her home in North Logan, Utah with several members of her family present.  She was born September 23, 1921, in Preston, Idaho, the youngest in the family born to Isaac Elwell Jr. and Francis Louisa (Madge) Carter.

She enjoyed her growing up years and was a good helper for her mother and helped her with the cooking. She sold vegetables around to homes in Preston.  Gwen was a great companion for her mother and took care of her giving up a lot of her recreation time. They would save their pennies and go to the shows and have a root beer float- and that is a celebration they enjoyed for many years.

She attended Idaho State College where she met a dapper, young man with dark, curly hair named Nathan Jordan.  They were married on November 20, 1941, in Pocatello, Idaho.  Their marriage was later solemnized in the Los Angeles California Temple.

Over the years, she and Nathan lived in Pocatello, Idaho; San Diego, California; Spokane, Washington and eventually back to Cache Valley. She worked many years for Bank of America as a teller, operations officer and on the traveling staff to help branches with their problems.

She was a member of the Church of Jesus Christ of Latter-day Saints having served in various positions including Stake Young Women’s secretary for 14 years.  She suffered her greatest sorrow when Nathan was diagnosed with pancreatic cancer and passed away on Sept. 16, 2001.  She took wonderful care of him and he had become so mellow as he finished his mission in life.  Nathan told her she was doing a great job and he appreciated all her sacrifices for him.

To order memorial trees or send flowers to the family in memory of Gwen Ellen Jordan, please visit our flower store.