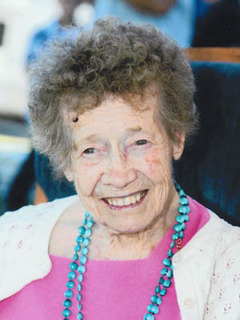 Grace Millard Kendall Veibell , devoted daughter and mother, quietly and gently completed her mortal journey of 100 years and one day on July 20, 2015 in company with her beloved daughters.  She was born in Swan Lake, Idaho in her Millard grandparent’s home to William Edwin Kendall and Ethel Julean Millard on July 19, 1915.

Grace idolized her older brother, Leland, and wanted to be his constant companion.  She was the spirited and beautiful first daughter, affectionately called “bidda Grace” by her father because she was so small. She lovingly played with and cared for her little sister, Edna, who had a “rheumatic heart” and couldn’t run and play with the other children. She was 5 when her brother, Carroll, was born in Twin Falls and considered him “her baby.” Two years later, in Downey, twin sisters Conna and Donna joined the family. She cared for one baby while her mother took care of the other. Times were hard. They moved to Cokeville, Wyoming where, six years later in 1928, twin sisters, LaRue and LaRae completed the family. They were back in Preston by 1931 when Edna died.

Grace loved to dance and she met her future husband,  Fred H. Veibell of Cornish at the Persiana dance hall in Preston.  He had slipped over the border from Utah to attend.  They were married on Dec. 8, 1938 in Logan, Utah and solemnized three years later in the Logan Utah temple.

Fred obtained various jobs to support his family. They lived in the Cache valley area where daughters, Marilyn and Joyce, were born.  They moved to Heber, Utah in 1947.  Julie was born in 1948.  Fred and Grace moved to Garland, Utah in 1974.  In 1985, they returned to Cornish where they lived out their lives close to family and good friends.

Grace had many calling in the church -- Visiting teacher, Primary teacher, and Relief society Secretary were her favorites. Grace was an avid bowler; she was in various leagues and enjoyed bowling at any given opportunity.

Funeral services will be held on Saturday, July 25, 2015 at 11:00 a.m. in the Cornish Ward LDS chapel. A viewing will be held on Saturday from 9:30-10:30 a.m. at the church in Cornish. Interment will be in the Cornish Cemetery. Arrangements are under the direction of Webb Funeral Home in Preston. Memories and condolences may be shared with the family at www.webbmortuary.com.

To order memorial trees or send flowers to the family in memory of Grace Millard Kendall Veibell, please visit our flower store.
Send a Sympathy Card