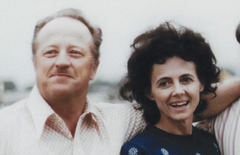 Glenda Smith Nelson passed away at the age of 89 on May 21, 2015 at the Heritage Home in Preston, Idaho.   Glenda was born to Welland and Elaine Smith on May 6, 1926.  The birth took place at Grandma Elizabeth Smith’s home which was across the road from Glenda’s parents in Riverdale, Idaho.  Soon the little girl was called “Spunky” because she cried a lot.  When she grew up a little and started to get into mischief with her sister Iva Lou, her Dad called them Hans and Fritz after a duo in a comic strip in the Deseret News.  She frequently worked on the farm with her Dad and her Dad called her “Little Pony.”  However, the name that had the best staying power was given to her by her first grandchild, Jessica, who tried to say “Grandma”, but it came out “Ponga”.  Everyone quickly adopted the nickname and it has remained for many years with only one small change…it evolved into “Pongy”.

Pongy had a fun life in Riverdale growing up.  Stealing the screens off the school house so they could cook chickens over a fire; mixing up the farmers milk cans; and stealing eggs away from a black widow spider were some of her youthful accomplishments.  After graduating from Riverdale School and then Preston High she attended Albion College and received her teaching degree.  Her favorite subjects were chemistry and math.  She graduated in two years and at the ripe old age of “19” was hired to teach school in Franklin, Idaho.

Her best friend, Spencer Nelson, came home from his LDS Mission and promptly left to serve in World War II.  When he came home they were sealed in the Salt Lake  LDS Temple on March 11, 1946 by David O. McKay.

Glenda loved gardening and grew 6ft. tall tomato plants. She had beautiful flowers around the house.  She was very active in the LDS Church and enjoyed being with and teaching the teenage youth.  She was Ward and Stake Mutual President among other numerous callings.

Mom and Dad were called to be Temple officiators and it was a joyous calling for them.  Her husband, Spencer, was killed in a car wreck on Oct. 18, 1996.  We are happy for them to finally be together again. They were blessed with 5 children: David Spencer Nelson (deceased), Vicki Lynn Nelson, Kathleen Kerr (David), Janis Margetts (Don) and  Cynthia Bennett.  They have 22 grandchildren and 26 great grandchildren. Glenda is survived by her sister-in-law Joyce Smith. Glenda was preceded in death by her parents, Welland and Elaine Smith,  husband Spencer E. Nelson,  brother Robert Smith, sisters Twila Abbott, Iva Lou Herd,  and Gale Schaffer, son David Spencer Nelson, grandson John Norman Margetts, granddaughters Randilynn Kerr Stolworthy, Stacie Bennett Lovell  and Hollie Lynn Kerr, and great-grandson Shawn MacIntosh.

We would like to express our sincere gratitude to the loving staff at Heritage Home, the Franklin County Transitional Care Unit, Doctor David Beckstead and the leaders from all three Legacy LDS branches  that have cared for Glenda for the past four years.  Finally, a very special thank you to the Hospice angels at Access who tendered all necessary care and comfort for Glenda’s ‘graduation’.

Funeral services will be Saturday, May 30, 2015 at 12:00 noon in the Preston 1st/5th/8th Ward LDS Chapel 213 South 200 East in Preston with President Mike Dansie of the Legacy 3rd branch conducting. A viewing will be held on Friday May 29, 2015 from 6-8 PM at Webb Funeral Home at 1005 South 800 East Preston, Idaho and Saturday from 10:30 – 11:30 AM at the church.  Interment will be in the Riverdale, Idaho cemetery. Memories and condolences may be shared with the family at www.webbmortuary.com

To order memorial trees or send flowers to the family in memory of Glenda Smith Nelson, please visit our flower store.
Send a Sympathy Card