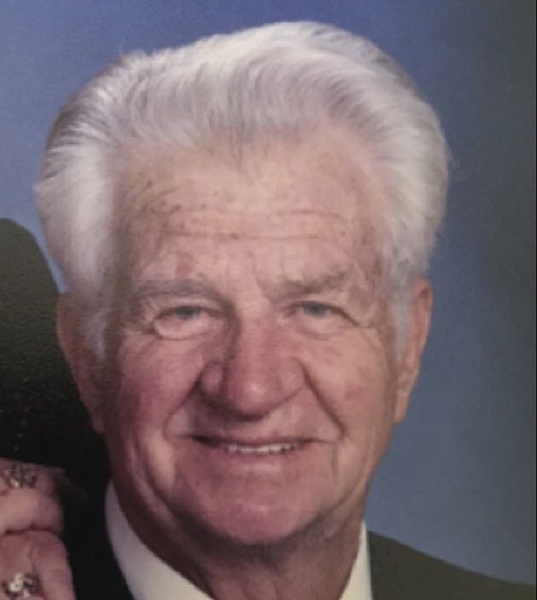 Nate Smith loved life. Whether racing his four wheeler or VW Bug on the beaches of Mexico, snow machining and hunting in the mountains of Idaho, or fishing or golfing in Arizona and Wyoming, he did it all the way. He played hard, and he worked hard. Growing up on the family farm in Southeastern Idaho, during an era when hard work was a way of life, Nate learned the importance of that work necessity, a trait he practiced his entire life and an ethic he passed on to his children.

George Nathan Smith was born April 20, 1925 in Preston, Idaho, the second son of Nathan LeRoy and Mary Burton Smith. He passed away July 25, 2021 in St. George, Utah. He grew up in the little farming area where he was born, enjoying the companionship of extended family and the many friends who were part of that close knit community. After graduating from high school there, he married a local girl, Geraldine Mendenhall and started his own family in the same valley. He enlisted in the Navy during World War ll where he was a medical corpsman, a vocation which he loved. He received an honorable discharge in 1946 and returned to Idaho where he often worked two or more jobs to support his growing family. Nate could build or fix anything, but he was a farmer at heart and he continued in that profession, eventually raising seed potatoes in Grace, Idaho during which time he served on the Idaho Potato Board as well as the National Potato Board, traveling throughout the United States in those capacities.

In 1975 Nate went to Winnemucca, Nevada, where he grew potatoes on a large farm he raised out of the desert, built a state of the art packing shed and shipped potatoes all over the United States under his own Desert Gem Potato Company label.

After retiring in 1982, and deciding he wasn't going to stay where the weather was cold, Nate and his wife Sharon, began spending winters in Yuma, Arizona where they played a lot of golf, and made many friends. They had a little home in Mexico on the Sea of Cortez where they spent many happy days fishing, beach combing and enjoying their wonderful Mexican neighbors.

In 2015, encouraged by their children, they moved from Arizona to St. George, Utah where they were able to spend the winters close to family. Summers were still spent in Star Valley, Wyoming where, until poor eyesight limited his activities, Nate could generally be found on the golf course or fly fishing on the many lakes and streams in that beautiful part of Wyoming.

Nate was a member of the Church of Jesus Christ of Latter Day Saints which provided him with an unwavering faith throughout his life and sustained him in his later years, especially when his health began to fail. He held many positions in the Church over the years.

Nate is survived by his wife of 46 years, Sharon, his children Jennifer (Randall) Smith, Marilyn (Lynn) Jepsen, Pauline (Everett) Miles, Don (Jerolyn) Smith, and Blaine (Nina) Smith. He is also survived by three stepsons, Kevin (Nancy) Keller, Kirby (Lucinda) Keller and Eric Keller. Other survivors include 25 grandchildren, 52 great grandchildren and 8 great great grandchildren and by his brother Ross. He was preceded in death by his first wife, Geraldine, and two brothers Roland and Delon Smith and one sister, LaRella Larsen.

A viewing will be held prior to the funeral from 10:00-10:30 a.m. Interment will be in the Cleveland Idaho Cemetery. Memories and condolences may be shared with the family at webbmortuary.com

To order memorial trees or send flowers to the family in memory of George Nathan Smith, please visit our flower store.
Send a Sympathy Card