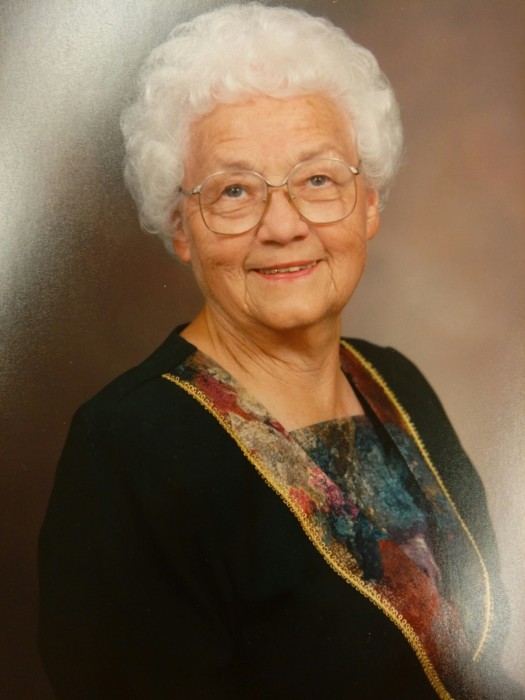 Elsie Florence Embry Bastian was born August 13, 1922 in St. Johns, Apache, Arizona.  She passed away on April 26, 2017 at the Heritage Senior Living in Preston, Franklin, Idaho.  She was the 5th child of 6 born to Albert Leo and Iola Harriett Bird Embry.  They lived in various places across the United States.

When Elsie was six years old, they moved to North Ogden, Utah and then to Logan, Utah where she attended Logan High School her senior year.  She then attended Utah State graduating in 1944.  Following her graduation, Elsie joined the US Navy and became a WAVE.  She served from May 1944 until October of 1945.

Elsie met Rolen Vern Bastian in March of 1944.  They were married on February 15, 1945 in the Logan LDS Temple, while they were both home on leave from the Navy. They had four children:  NIel Rolen, Saundra, Eric Embry and Janis.

Elsie had a firm testimony of the Gospel of Jesus Christ and that never wavered.  She loved serving in every calling she ever had in the LDS Church.  She was a teacher and coach in the West Side School District for 27 years.  She dearly loved her students.  She also enjoyed serving in many community organizations.  Elsie loved writing, attending the temple and spending time with her family.

She was preceded in death by her parents and four siblings, her husband, Rolen Vern Bastian, by her son, Niel Rolen Bastian and by a grandson, Bryon Scott Buttars.  Her survivors include her children:  Saundra (Carl) Clark, Eric (Marsha) Bastian and Janis (Scott) Buttars all of Weston, Idaho; 10 grandchildren, 22 ½ great-grandchildren and a sister, Leora (Sterling) Bennion of Fresno, California.

Funeral services will be held on Saturday, May 6, 2017, at noon in the Weston Idaho First Ward Chapel with Bishop Randy Austin conducting.  Friends may call Friday from 6-8 p.m. at Webb Funeral Home, 1005 South 800 East, Preston, Idaho and Saturday from 10:30-11:30 a.m. at the church.  Interment will be in the Weston, Idaho Cemetery.  Memories and condolences may be shared with the family at www.webbmortuary.com

To order memorial trees or send flowers to the family in memory of Elsie Florence Bastian, please visit our flower store.
Send a Sympathy Card