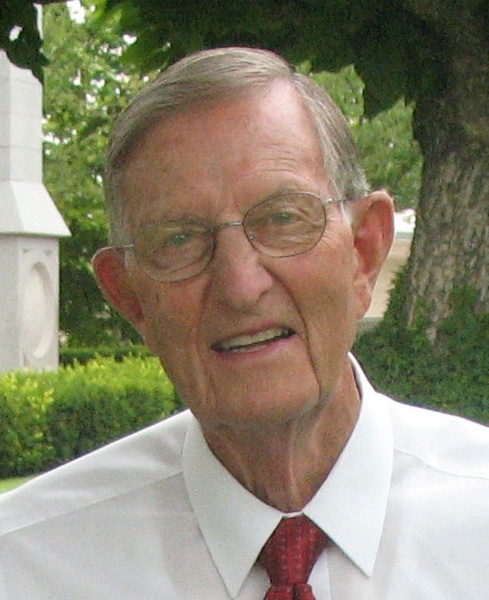 The children of Eldon Talbot Bennett announce his passing, at the age of 91, on Tuesday, December 18, 2018 at his home in Franklin, Idaho.

Eldon entered this world at the family home in Mapleton (Cub River), Idaho on November 3, 1927.  Eldon was the last of 11 children born to Henry Leroy and Esther Talbot Bennett.  The Bennett family of Cub River were an active, happy bunch, working hard during summer days, and enjoying time together on winter evenings, seated and chatting around the wood stove in the front room.

At an early age Eldon’s father assigned him a small Jersey cow to tend and milk.  Other childhood chores included “trompin’ ” hay, hauling water from the spring, keeping the kitchen supplied with firewood, and standing on the harrow for added weight as his father worked the fields with the horses.  In the fall and winter, the horses doubled as transportation for him and his sisters to and from the two-room schoolhouse a mile up the canyon.  And, it was happy day when Eldon purchased his own, beloved horse, Tony, a mustang from Antelope Island, with money he had earned from raising pigs.

As a youth Eldon’s typical day started with the morning milking of the family’s small herd (when he was often heard yodeling), followed by a breakfast of wheat mush and fried eggs, and then a quick dash through fields and over barbed-wire fences to catch the school bus to Franklin.  Here in the “big city” Eldon caught the attention of a local school girl, Ina Woodward, who took particular notice of his strong, lean physique, handsome features, and trademark white shirt, “always clean and pressed.”  He reciprocated, usually at the end of school while sitting in the parked school bus readying for departure, by snatching from Ina’s hair the bow she had carefully selected that morning, as she “just happened” to be walking alongside the bus past his window.  Eldon had a special shoe box at home where the ribbons were carefully stored.  A developing mutual interest, however, would be put on hold when the Bennetts moved from Cub River to Preston.

At Preston High, Eldon would excel in athletics, and was a supportive friend to many.  In the years to come he would always cherish his association with classmates and teammates, regularly organizing gatherings that ultimately led to a 65-year class reunion, and reminiscing with teammates over the sweet taste of victory when they edged out Coeur d'Alene in the 1946 Idaho State High School Basketball Championship.

After graduation in 1946 Eldon enlisted in the U.S. Navy where he was assigned a 2-year tour of duty on the aircraft carrier, USS Kearsarge, patrolling across the Atlantic in post-war Europe.  Prior to his enlistment, however, the mutual interest between Eldon and Ina had been re-kindled to a point where, during a subsequent leave of absence, they were married on September 2, 1947 in the Salt Lake Temple.

After discharge from the Navy, Eldon attended Utah State Agricultural College in Logan, where he graduated in 1952 with a degree in Civil Engineering.  While living in Preston, Eldon began his career with the Idaho State Highway Department as he and Ina started their family with the arrival of sons Jedd and Scott in 1950 and 1953.  Within a few years the young family moved to sunny California, where Eldon took employment with the California Bridge department, and in later years with Seaside Oil Company and Pacific Materials Laboratory.  His assignments took them to Sacramento; Buellton, where son Paul joined the family in 1956; Santa Barbara, where son Mark and daughter Tamara came along in 1959 and 1964; and finally, Camarillo, where daughter Teresa made her entrance in 1967.  In Southern California Eldon became an expert in soils and materials engineering, and eventually started his own firm in 1976, Tierra Tech Testing Laboratory.  Tierra Tech was highly successful from the beginning, and much of Eldon’s work came from repeat clients who trusted and respected him.

After two additional moves, first back home to Franklin, and then out to Redlands, California, Eldon and Ina served a mission from 1996 to 1998 for the Church of Jesus Christ of Latter-day Saints. They were assigned to the South Africa – Cape Town Mission where many friendships were forged and much faith was strengthened.  While in South Africa they also had the pleasure of serving in the Queenstown region where Eldon’s grandfather, Henry Talbot, had been raised after emigrating with his parents from England in 1820.

In addition to missionary service, Eldon served faithfully throughout his life in many and varied Church callings, as well as in community projects and assignments.

Eldon and Ina returned home from South Africa in 1998 to friends and family in their beloved Franklin County.  A man of the outdoors, Eldon always loved to be in his garden and could coax his corn to grow well over 10 feet (with worm-free cobs!) in the rich soil he loved to nurture.  Red-ripe tomatoes and sweet onions the size of cantaloupes were also his specialty, as well as garden flowers such as marigolds, forget-me-nots, gladiolas, and poppies … always finding joy in sharing with others in the community.

Dad is now safely home for Christmas.  Thank the God of Heaven for the gift of Christ, whose birth we celebrate this season.

Funeral services will be held on Saturday December 29, 2018 at 11:00 am in the Franklin LDS Stake Center, 106 East Main in Franklin. A viewing will be held Friday from 6-8 pm at Webb Funeral Home in Preston and Saturday from 9:30-10:30 am at the church. Interment will be in the Franklin Cemetery. Memories and condolences may be shared with the family  at webbmortuary.com

Click the "Red Arrow" to listen to funeral services. You may also order copies by clicking the "Order" button.
To order memorial trees or send flowers to the family in memory of Eldon Talbot Bennett, please visit our flower store.