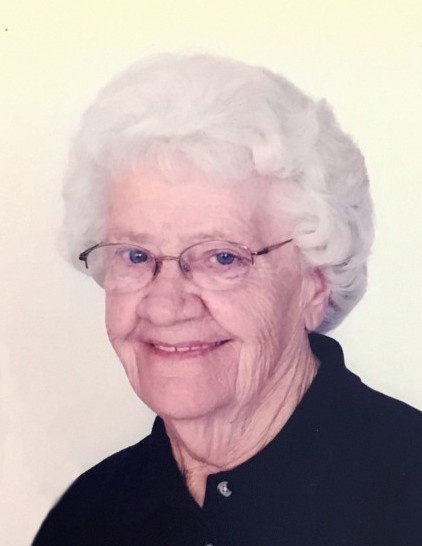 Donna Kendall Sharp 95, passed away peacefully on Sunday evening, March 4, 2018 in Preston Idaho. Donna was born November 11, 1922 in Downey Idaho to William Edwin Kendall and Ethel Julian Millard Kendall. Donna was one of two sets of twins in the family and the sixth child to be born in the family of eight children. Their family moved to Preston Idaho where she attended grade school graduating from Preston High School.

The summer of 1944 she met Owen Sharp who had just been drafted in the Army. They dated before he left for basic training in July. When he returned at Christmas he bought Donna a ring and ask her to wait for him. Owen served in Europe for two years returning in 1946 having earned the Purple Heart. Donna waited two years and upon his return married Owen Watson Sharp the son of Alvin Joseph Sharp and Lorna Eliza Watson Sharp In the Salt Lake Temple on October 16th 1946. They came back to Fairview and bought the family farm where they have lived all their lives.

Together Donna and Owen have dedicated their lives to serving others. She served in many callings in the women’s organizations of the church.   Donna always had a cheerful greeting as she saw you in MH Kings where she worked for many years while Owen worked in the Preston post office. They served as ordinance workers in the Logan LDS temple for 12 years. Donna and Owen made many annual trips to Alaska to visit their son Dennis Kendall and his wife Barbara their six children and 18 grandchildren. At Owens passing in 2014 they had been married for 67 years.

The immediate family would like to thank Donna’s extended family and friends for their love and care.  We express our appreciation to the staff at the Heritage Senior Living Center as well as the caring Access Hospice staff.

A celebration of Donna Sharp’s Life Service is scheduled will be held Friday, March 9, 2018 at 11:00 am in the Fairview chapel 165 W. 4800 S. in Fairview, with Bishop John Grifiths conducting. A viewing will be held Thursday from 6-8pm at Webb Funeral Home and Friday from 9:30-10:30 am at the Fairview chapel. Memories and condolences may be shared with the family at www.webbmortuary.com

To order memorial trees or send flowers to the family in memory of Donna Sharp, please visit our flower store.