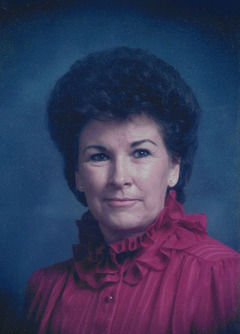 Donna Van Orden Dahle age 87 of Lewiston, Utah passed away peacefully at the Rocky Mountain Care Center in Logan Utah Sunday, July 24, 2016.  She was born in Hyrum, Utah March 6, 1929 the first child of Ervin and Venna Allen Van Orden. Donna married Rod Dahle in Preston, Idaho March 21, 1946.  After a joyous life together he passed away Dec. 8, 2005. They had three daughters and two sons.

She enjoyed working and helping on the farm when she was a youth and driving the tractor for her father. She was an active member of the LDS church and loved her calling as the ward librarian.  She was a big fan of the Utah Jazz and rarely missed watching a game on TV and often attended games in Salt Lake City with her husband and their good friends, where they had season tickets in the Salt Palace Arena.

She was also an avid golfer and a member of the Birch Creek Ladies Association and continued to golf well into her 80’s.  She was a life long resident of Lewiston and for the last 87 years never missed a 4th of July celebration or the annual parade where she could be seen sitting along the parade route with her extended family.

She and her husband owned and operated Dahle’s Heating and Plumbing in Lewiston Utah for over 40 years.  She had many friends and loved ones in Lewiston and greatly enjoyed the camaraderie of her pinochle club.  She has always had a garden and was known throughout the family as an excellent cook.  She loved all of her children, grandchildren and great-grandchildren.

Donna is survived by her daughter; Janet Bosen of Lewiston, Utah; Becky (August Miller) of Highland Utah; and a son John Dahle of Lewiston Utah; a sister Diane Jorgenson of Lewiston, Utah, Elaine Vee Van Orden-Barton of Boise, Idaho; 10 grandchildren and 10 great grandchildren and one great-great grandchild. She was preceeded in death by her husband Rodney Dahle,  her daughter Sherrie Jackson, her son Dennis Dahle, a brother Neal Van Orden, and a grandson, Craig Reeves.

Funeral Services will be held Monday August 1, 2016, at noon in the Lewiston Third Ward Chapel, 16 S. Main St. Lewiston, with Bishop Troy Karen conducting. Friends may call on Sunday from 6 to 8 p.m. at Webb Funeral Home, 1005 South 800 East. Preston, Idaho; and Monday from 10:30 to 11:30 a.m. at the church. Interment will be in the Lewiston Cemetery. Memories and condolences may be shared with the family at www.webbmortuary.com

The family would like to give a special thanks to Rocky Mountain Hospice and also to Donna's nurse Debbie for the loving care the provided.

To order memorial trees or send flowers to the family in memory of Donna Dahle, please visit our flower store.