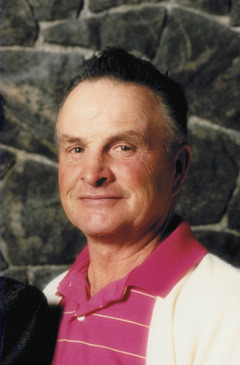 He attended North Cache High School and then he was honored to serve two years in the United States Navy during World War II.  His ship was the first to dock in Tokyo when Japan surrendered and he was among those first soldiers that set foot ashore.  Following his service to his country, he served a two year LDS mission to the Eastern States.  During that time his family moved from Lewiston to Swan Lake and then finally purchased another farm in Clifton, Idaho.  Later, Don served another mission with his wife to Texas Fort Worth.  They spent twelve months working in the mission office during the day and regular missionary work in the evenings.

Don married Connie Viehweg Aug. 10, 1949, in the Logan Utah Temple.  They lived most of their lives on a dry farm in Clifton.  In order to keep the farm running and support his family, he also took on several different jobs through the years.  The last twenty years before retirement he worked as a pipe-fitter for Thiokol/ATK Plant at Promontory Point in Utah.

He served his community and church in various ways.  For several years he was a Republican Precinct Committeeman and a charter member of the Clifton Lions Club.  He was best known for putting together a merry-go-round for the 24th of July Celebration.  His church service included Elder’s Quorum, Young Men’s, Home Teacher, teacher and in the French Extraction Program.

After retirement and until Connie’s death in 2009, they spent their winters in Salome, Arizona.  They had a great love for the beauty of the desert especially raising lemons, oranges, grapefruits and dates.  During his life Don had two very serious accidents that resulted in brain surgeries.  Prostate cancer struck him and for several years he was able to hold the cancer at bay.  But finally the cancer won.

He is survived by his three children:  JaNeil (Kurtis) Buttars, Val (LaRee) Westover and Peggy (Jed) Rawlins; sixteen grandchildren, fifty-six great-grandchildren; a sister, Vera Olsen; and by four brothers, Nord, Reed, Harold and Clair.  He was preceded in death by his wife, Connie; by his parents and by four sisters.  The family would like to express a heartfelt thanks to Access Hospice and especially Thelma Roley for the care he received.  That care made his last days more comfortable.

Funeral services will be held on Saturday, July 18, 2015 at 11:00 a.m. in the Clifton Second Ward Chapel with Bishop Clark Cox conducting.  Friends may call Saturday from 9:30-10:30 a.m. at the church in Clifton.  Military rites and interment will be in the Clifton Cemetery.  Memories and condolences may be shared with the family at www.webbmortuary.com

To order memorial trees or send flowers to the family in memory of Don Albert Westover, please visit our flower store.
Send a Sympathy Card