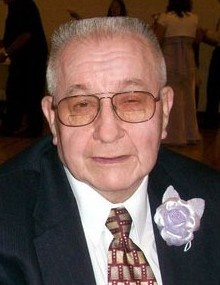 Dennis Leon Wilkes, 84, passed away Aug. 9, 2017 at the Franklin County Transitional Care Center in Preston, Idaho.  He was born June 18, 1933, in St. Charles, Idaho the son of Chauncey Wilkes and Clara Winterbottom Wilkes.  He served his country in the US Army stationed in Germany.  He married Nancy LaVon Adams on Sept. 24, 1954 in Grace, Idaho.  Their marriage was later solemnized in the Ogden Utah Temple.  She preceded him in death on Sept. 17, 2002.

He loved baseball and was an avid Yankees fan.  He also loved football and cheered for anyone but the Denver Broncos.  He worked as a mechanic with Preston Dodge and West Motor for many years.  He also worked for Pepperidge Farm and retired from there after 20 years.  He was also a motorcycle mechanic and enjoyed going on rides.

He loved his family dearly and enjoyed many family gatherings at Bear Lake and camping.   Family was the most important thing to him.  He loved his grandchildren and great-grandchildren very much.  He was an active member of the Church of Jesus Christ of Latter-day Saints where he enjoyed serving as a home teacher for many years.

He is survived by a daughter, Linda (Scott) Hampton of Franklin, Idaho; a son, Kevin (Melinda) Wilkes of Preston; eight grandchildren, nine great-grandchildren; and by two brothers, Dale (Betty) Wilkes of West Valley City, Utah; and Deon (Ineda) Wilkes of St. Charles, Idaho.  He was preceded in death by his wife, by a daughter, Susan Pacheco; by two brothers, Gaylin & Arlen Wilkes; by a sister, Wyone Seamons and by an infant sister, Daurice.

To order memorial trees or send flowers to the family in memory of Dennis Leon Wilkes, please visit our flower store.