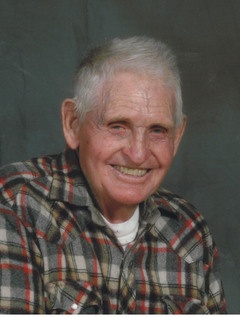 Delmon  (Dell) Joy Griffiths left this earthly life on January 19, 2016 at the Transitional Care Center in Preston, Idaho of natural causes. Dell was born in Treasureton,  Idaho Sept 27, 1919 to Fredrick and Alice Albertie Griffeth Griffiths.  He spent most of his younger years in Treasureton and then following the death of his father when he was in the 8th grade the family moved into Preston.  It was at this time that he dropped out of school to help take care of his mother and siblings.

Dell married his sweetheart Kathleen Virginia Barfus in the Logan LDS temple on June 30, 1947. They lived on a small farm in Dayton where they continued to help his mother and brother while raising their ten children. Kathleen passed away in 1980 and in 1991 Dell married Doris Woodward. Together they served a mission in Las Vegas Nevada. Doris passed away in 1995.

Dell held many various jobs throughout his life; however, his most favorite was riding range for the Malad Cattle Association in Weston Canyon.  Dell was a member of the Church of Jesus Christ of Latter Day Saints where he served in many different callings throughout his life. Dell loved people. He enjoyed visiting with friends and family above anything else.

Services will be held Saturday, January 23, 2016  at 10:00 a.m. in the Dayton LDS Chapel. A viewing will be held on Friday from 6-8 p.m. at Webb Funeral Home, and Saturday from 9:00-9:45 a.m. at the church. Interment will be at the Dayton City Cemetery. Memories and condolences may be shared with the family at www.webbmortuary.com

To order memorial trees or send flowers to the family in memory of Delmon Joy "Dell" Griffiths, please visit our flower store.