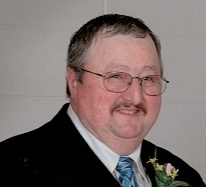 David Wayne Gregory, 60, passed away September 18, 2019 at the University of Utah Hospital in Salt Lake City, Utah from complications of a stroke.  He was born December 12,1958 in Preston, Idaho, the second son of Donald L. Gregory and Flourice Haslam Gregory.   It was interesting to note that he had his stroke on the anniversary of his father’s death.

He spent his early years living on farms in Cub River and Egypt Idaho.  He told lots of stories about life on the farm, accidents and fun.  It was here that he lost his middle finger when he was 6 riding the hay derrick to the top of the old barn.  He tells stories about Paul always running to the house for band aids to fix booboos the younger kids acquired during play.  Many times it took more than one.

When he was 13 the family purchased a farm in Lewiston, Utah.  The four boys and their mother ran the farm while his dad trucked coal and anything else he could to support his family.  Dave loved those big trucks from an early age and learned to drive them.  His family had many good times on that farm.  It was here that he learned that he had a cousin he saw rarely Ken Haslam.  Those two became as close as brothers.  They got into mischief like best friends often do.  Stories of these antics have been very fun to hear.  His parents were just like grandparents to our children.

While he was in high school, he helped on the family farm, worked at Hall’s store and Kelly’s service in Lewiston and Preston.  He was always looking for ways to earn money.  He was always fun to be around and was a good friend.  He had a good work ethic doing whatever it took to get the job done.  He passed this quality on to his children.

On December 10, 1981 he married the girl next door, Cheryl Hymas, in the Logan Temple.  At the time of their marriage they lived in Linrose, Idaho where he worked as a herdsman.  He was very fond of the Sparrows and became like family to them.  Unfortunately, they sold their cows and for the first and only time in his life he had to look for a job.  Usually the jobs found him. He got a job in Benson UT, as a herdsman again.  In 1988 he was offered a job by Ron Randall as a herdsman.  This was like going home for him.  He worked the farm his parents sold before they moved to Lewiston.  After a time, he convinced his wife he wanted to drive truck.  He won the battle and started hauling milk for Randalls.  This began a 30-year career as a milk hauler, a job he loved very much.  He went out of his way to make sure he helped the farmers by setting up their wash systems, and left the barns as clean as he could.  He also spent many hours washing the trucks and tankers so they gleamed.  He was proud of the work he did.  He made friends where ever he went.  He made friends with the farmers he picked up from and their workers as well.   He was invited to attend weddings, baby blessings, baptisms, and mission meetings.

He also loved his children.  They loved to go on the truck with their dad and would often sleep in front of the door he had to go out to go to work because he told them he wouldn’t wake them up they had to be ready to go when he was.  When he wasn’t working he was playing with the kids.  They were his joy in his life and he was very proud of the young men and women they became.  They learned the value of service as well helping out others that needed help. His favorite thing to do with his girls was go clothing shopping.  He was patient and would sit for hours while they tried things on and had fashion shows for him.

He worked hard as the kids grew, supporting them in school, and on missions.  He was a great support to his wife and encouraged her to return to school as the kids got older.

He had several church callings, his favorite was nursery, which he did for many years.  Then he was a ward mission leader.  His main job at that time was welcoming new families into the ward.  He was a little shy and this was a challenge for him at first.  But he got to love it and it became easier for him.  He also volunteered each summer for over 25 years at the cub scout day camp, teaching the boys to shoot BB guns and bows and arrows.

He found new joy in family as our kids got married and started families of their own.  His grandchildren provided him with much joy.  He loved to spend time with them, reading stories, going to programs, and playing with them.  They loved to play in his redneck swimming pools.  He will be greatly missed.

After his heart surgery in October 2018 he slowed down working as much and spent Wednesday afternoons with his local grandchildren, he would pick them up from school in his pickup truck and bring them home to grandma for dinner and fun playing with the cousins.  A change of jobs prevented this from happening the last few months and all missed it terribly.

He was doing what he loved best the morning he had his stroke.  He was working, even though he didn’t feel well.  He was truly a “get ‘er done” kind of guy.

We will all miss his Dutch oven potatoes, parties, smile, and his willingness to serve others.  He was always calling people “sunshine” and trying to brighten their day.  He often gave his treats his wife would pack in his lunch to someone he thought could use a goody. He would often tell people he called to keep on smiling as he told them goodbye.

He was preceded in death by his parents.  He is survived by his wife Cheryl, his children, Nansi Howard [Eric] Lesli Abrams [Matthew], Christopher [Shandy] and Matthew[Becky] and 12 grandchildren he loved very much.  He is also survived by his brothers Paul [Trena]  Tony [Debbie] and Troy.  And by his step father David Sparks also known to us as Clarence.

Dave’s family would like to thank those who were involved in Dave’ care during his passing.

Funeral services will be held on Friday, September 27, 2019 at noon in the Preston 10th Ward Chapel, 155 N. 200 W., Preston, Idaho with Bishop John Balls conducting.  Viewings will be held on Thursday from 6-8 p.m. at Webb Funeral Home, 1005 South 800 East, Preston, Idaho and Friday from 10:30-11:30 a.m. at the church.  Interment will be in the Preston Cemetery.  Memories and condolences may be shared with the family at webbmortuary.com

To order memorial trees or send flowers to the family in memory of David Wayne Gregory, please visit our flower store.