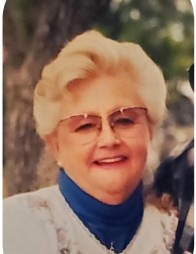 She was called home to her Heavenly Father on August 27, 2020

She was raised in Idaho Falls, Idaho most of her life , graduated from Idaho Falls High School, attended classes at ISU College of Technology, Clark Secretary College and EITC in Idaho Falls.  She was trained as a tailor by S.Eddie Pederson and Larry Huretz at Blocks Clothing store and later became a master tailor and worked at ZCMI, Dillards, JC Pennys, Macy’s and Teton Cleaners. She and her husband Dee also had a shop in their home being self employed under D&D Alterations.

She had also worked in law enforcement with the Bonneville County Sheriff’s office as a jailor, as a volunteer for the Bonneville Police Department with Citizens Watch Patrol. She graduated from their police academy for that division and was certified.  She was a supervisor for a sub-contractor for EG&G Lockeed  at the INL.

In 1950 she married. She has had five children and later divorced. In 1984,she married Lawrence Dee Fullmer from Rexburg. It was love at first sight for both of them, they were later sealed in the Idaho Falls Temple on April 30th,2002.

She was a charter member of the Theta Rho Girls Club, the order of the Odd Fellows Lodge in 1947. She has been a girls advisor twice, four times Noble Grand of Lily Rebekah Lodge and officer of Bingham Odd Fellows Lodge. She had been a Brownie Scout and a Girl Scout growing up and raised all five of her children in the Scouting program. She was a den mother and scout leader for several years.

Darlene was an active member of the Church of Jesus Christ of Latter Day Saints and has held many positions in the church and sang in the choir. Her last position was the ward historian for eight years for the Preston 8th ward.

She was a life time member of the Associated of Vietnam Veterans of America.  She was elected as the president of the Associates Idaho State Council in 2012-13.  Her real enjoyment in this organization was being in the color guard and welcoming the soldiers home from war or seeing them off to war.  She was presented the Spirit of Freedom award by Sen. Crapo for her volunteer work with the veterans.

After the untimely death of her husband, Dee, her son came to live with her and helped with her home sewing business. She had trained her husband and son to be tailors. She and her son traveled in the intermountain area to motorcycle rodeos and rallies to sew for the bikers (they had quit a business sewing patches, etc.)

She truly enjoyed her husband and children. She loved music, sewing crafts, painting, gardening, old movies playing games on her kindle fire, board and cards games with her family and friends.

After her son passed away, she moved to Preston, Idaho to live with her daughter (Sonya Kimball). She loved living in Preston very much and made a lot of friends. She soon became a member of the board of directors for the Franklin Community Center and later the secretary.

A short viewing will be held on Thursday, Sept. 3, 2020 at 7 p.m. at Webb Funeral Home, 1005 South 800 East, Preston, Idaho.  Interment services will be held at the Rose Hill Cemetery, 2355 Rollandet St, Idaho Falls, ID 83402, on Friday, September 4th at 11am.  Memories and condolences may be shared with the family at webbmortuary.com

To order memorial trees or send flowers to the family in memory of Darlene Blenda Fullmer, please visit our flower store.