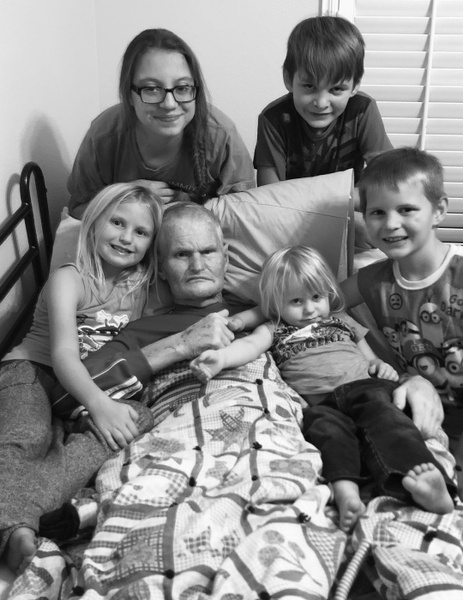 Dale E. Hardy, 69, passed away very peacefully on December 29, 2019 in his newfound home in Henderson NV surrounded by his family here on earth and his family in heaven. He gave a brave fight against Leukemia and was positive and happy through it all. Dale was born on September 12, 1950 in American Fork, Utah to Barbra Lucille and Ellsworth “Bud” Hardy. He was the 6th child in a family of 8 kids. He grew up on a farm in Hazelton Id, where he played with his siblings and rode his horse Ginger. Dale loved sports and played football and wrestled for Valley High School. Dale served a mission for The Church of Jesus Christ of Latter Day Saints in 1976 in the Ohio-Columbus Mission.  It was on his mission that he found his gift for gab. His mom often said that he left a shy quiet boy and when he came back, he wouldn’t shut up. Dale moved to Preston ID to work after his mission and it was here that he was introduced to the love of his life Cathryn Gordon. After 2 dates Dale asked Cathy to marry him and on June 1st 1979 they were married. Dale and Cathy later were sealed in the Logan, UT temple for Time and Eternity. Dale and Cathy were best friends and married for 40 years.

Dale worked for many farms in the Preston area, using his farming and animal skills. He loved all animals and training them. Dale also worked for Icon in Logan UT for many years. Dale was an avid sports fan and played in many leagues. He enjoyed playing with all his Softball buddies. He often carried his bats, balls, and mitts in his truck, just in case. He loved playing basketball and often played with his nieces and nephews and friends. Dale loved to coach any sport, he loved bringing the joy of sports to all the kids that he coached. He loved and remembered everyone he coached. He was often found teaching wrestling moves, dribbling, and playing catch with his kids and grandkids.

Dale’s greatest joys were his family and especially his grandkids. He could be found at many businesses all over Preston bragging about his kids and grandkids.

He was very loved and will truly be missed always.

Funeral services will be held Saturday, January 4, 2020 at 5:00 PM in the Preston 3rd Ward LDS Chapel, 155 North 200 West in Preston.  There will be a visitation held on Saturday from 4:00-4:45 pm at the church. Memories and condolences may be shared with the family at webbmortuary.com

To order memorial trees or send flowers to the family in memory of Dale E Hardy, please visit our flower store.