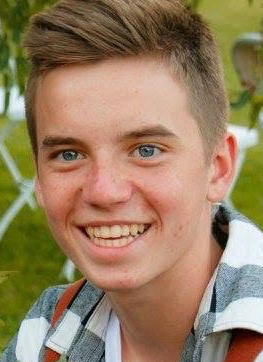 Colby James Bray, age 18, tragically passed away, on November 25 2019, at Eastern Idaho Regional Medical Center due to an unknown illness.  Colby was born August 6, 2001 in Salt Lake City to Jeff and Michelle Bray. He entered this world with huge blue eyes, that you could not help but notice, and jet-black hair that stood straight up.  Later, his beautiful smile stole the glances of all. Colby was a tender son, compassionate brother, loving uncle, grandson, nephew, cousin, and caring friend. He included everyone he came in contact with.  He loved and excepted all.  If you knew him, you surly heard him say “I Love you” or “Your beautiful”.

His family moved to Preston, Idaho when he was three years old where he gained many lifelong friends.  He was an amazing brother to his 13 siblings.  He was not reserved when it came to complimenting his sisters, or any girl for that matter.  Women were to be treated with kindness, love and respect.  He often told his sisters they were beautiful, and defended them every needed moment. He was a protector, especially if he knew someone wasn’t being treated right.

Colby had a very artistic personality, he loved writing music and sharing it with everybody he cared about. His life dream was to be a music artist. He wrote many songs the last few months of his life and would call his mom and sing them to her over the phone.  If he wasn’t writing his songs you could find him adventuring, longboarding, and spending time with his family and friends.  He was a beautiful artist.  He loved going on adventures, as he put it, and everything was an adventure.  He discovered surfing last summer and was looking forward to more of that in his future.

In the last few months of his life he grew a great testimony of his Heavenly Father and Jesus Christ.  He had grown a love for the Book of Mormon and often checked on his family to make sure they were reading it too.  Colby had recently expressed a great desire to serve a mission, but he wasn’t sure what that meant for him.  We now know where his mission is.

He is survived by his father and mother Jeffery and Michelle Bray, his Grandparents Neal and Cheryl Swann, Robert and Connie Bray, and all of his Siblings, Brittney (Paul) Ransom, Sara Bray (Dylan Schenk),Christopher (Kristyn) Bray, Heather Bray (Patrick Parker), Brennan Bray, Hannah Bray, Kylie Bray, Emma Bray, Dawson Bray, Kiera Bray, Chloe Bray, Amelie Bray.  Colby was preceded in death by his brother Clayton Garvis, just 18 months ago, he missed his brother terribly.  We can only imagine how wonderful this reunion was for them.

To order memorial trees or send flowers to the family in memory of Colby James Bray, please visit our flower store.
Send a Sympathy Card