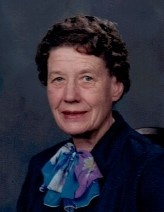 Cleda Auger, 97, passed away Wednesday, April 24, 2019 at the Heritage Home in Preston, Idaho. She was born on October 26, 1921 in Glendale, Idaho to Leland and Emma Housley Auger.

She was a member of the church of Jesus Christ of Latter-day Saints and served missions prior to and following her employment at Ricks College (BYU-Idaho). While at Ricks, she taught Foods and Nutrition, Child Development and Book of Mormon. She earned her Master's Degree as well. She has served in many Church positions and did a lot of genealogy and temple work. After her retirement and mission, she moved back to Preston. Shortly thereafter, she was called on a Family History Mission in Salt Lake City, Utah. She also served in her stake Family History Center.

She is survived by two sisters, Vaudis Sharp Porter and Lucy Porter both of Preston. She was preceded in death by her parents, two brothers, Letho and Veloy Auger, and three sisters Alna Keller, Ellen Farnworth, and Zetta Auger.

Funeral services will be held Monday, April 29, 2019 at 12:00 noon at Webb Funeral Home, 1005 South 800 East in Preston, Idaho. A viewing will be held Monday from 10:30-11:30 a.m. also at the funeral home. Interment will be in the Preston Cemetery. Memories and condolences may be shared with the family at webbmortuary.com

To order memorial trees or send flowers to the family in memory of Cleda Auger, please visit our flower store.