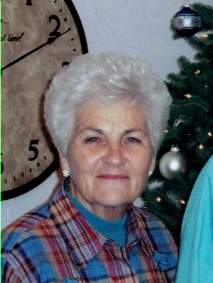 Clarice met “her prince”, Arvin Rawlings, while only a sophomore in high school.  Although they were too young to date, they met at dances and movies and courted until after graduation.  They were married June 22, 1951 in the Logan Temple, leaving right after for Sioux Falls, SD, where he was in training for the Air Force.  A year later, they started their family in Slayton, MN, and later moved home to join the family farm in Fairivew.

Clarice loved serving in many capacities in the Church of Jesus Christ of Latter-day Saints and was also a very active member of the DUP, however, her greatest love was her family and the holidays.

She is survived by her children, Michael (Wendy), Scott (Ruth), Kip (Christine), Cindy (Larry), Kristi (Nat), and Todd all of Preston.  She was blessed with 19 grandchildren and 28 “Great-Grands”.  She was preceded in death by her husband, Arvin, by a son-in-law, Todd Christensen; by a grandson, Brooks Rawlings, and by four brothers and a sister.

Funeral services will be held on Saturday, October 14, 2017 at noon in the Fairview First Ward Chapel with Bishop Richard Nelson conducting.  Friends may call Friday from 6-8 p.m. at Webb Funeral Home, 1005 South 800 East, Preston, Idaho and Saturday from 10:30-11:30 a.m. at the church.  Burial will be in the Fairview Cemetery.  Memories and condolences may be shared with the family at www.webbmortuary.com

To order memorial trees or send flowers to the family in memory of Clarice Rawlings, please visit our flower store.