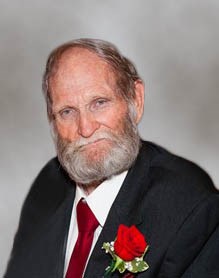 Dad had an interesting and exciting childhood residing in Escalante, Utah; Mesa, Arizona; Shelly, Idaho; and eventually settling in Burley where his father Elwood taught LDS Seminary for many years and mother Glendora taught school at Springdale and Miller Elementary Schools. Byron helped build the family homestead on Yale Avenue in Burley before graduating from Burley High in 1947. He served in the Army for two years before serving a 30-month LDS mission to Argentina where he was blessed with success and the ability to speak beautiful Spanish. He and Dolores were married in the Idaho Falls LDS Temple in 1952 before attending BYU in Provo. Both Byron and Dolores graduated with Bachelor’s degrees before embarking on a 17-year career in the U.S. Air Force. Dad’s military service took his family to Texas, Nebraska, Spain, Turkey, Maine, and California, where he and Dolores raised their boys and taught them the gospel of Jesus Christ, setting an example of love and devotion to each other and to the Lord. Dad loved serving in a variety of callings, including branch president, gospel doctrine instructor, and stake missionary. Upon leaving military service, Byron and Dolores taught school in the Cassia School District for more than 20 years where Dad was a media specialist, librarian, Special Education teacher, and an English teacher. He ended his career at Dworshak Elementary in the Library. He loved good books and was a voracious reader, which enabled him to converse on almost any topic. Byron and Dolores served a rewarding 18-month Church mission in the volcano region of Guatemala after retiring. Years later they moved to Preston, Idaho to live with Eric and Sandy where they enjoyed their last years together. Dad married Ann Lee Owens in early 2014 and moved back to Burley to live out his remaining days.

Byron was known for his love of photography and for his award-winning pictures of the Mini-Cassia area and various cultures of his travels. Dad was a man of many talents and interests where he was equally comfortable reading children’s books to elementary students, working on engines, welding, or swinging a hammer on a home addition. His acquaintances can tell you of the gentlemanly courtesy and politeness he used in his daily interaction with everyone.

Funeral services, conducted by Bishop Ty Jones, will be held on Saturday, March 24th at 11:00 a.m. at The Church of Jesus Christ of Latter-day Saints, 3rd & 7th Ward Chapel, located at 2200 Oakley Ave., Burley, Idaho. A viewing will be held from 9:00 – 10:30am prior to the funeral. Interment will be in the Pleasant View Cemetery immediately following the funeral. Military rites will be performed by the Mini-Cassia Veterans Organization.

To order memorial trees or send flowers to the family in memory of Byron Harvey Allred, please visit our flower store.
Send a Sympathy Card