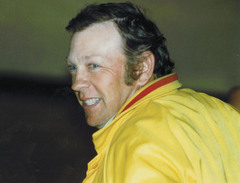 Brent Merlin Rawlings passed away peacefully at his home on July 21, 2016 in Fairview, Id. Brent was born November 30, 1943 to Merlin and Erma Rawlings in Fairview Idaho at the family home. His birth was a special event because he was accompanied by a twin brother whom they named Kent. They spent their youth growing up and working on the family farm together. Brent played baseball throughout his high school years. He graduated from Preston High School in 1962 and later attended Rick’s College. Also in 1962 Brent met his high school sweetheart Suzanne Strong whom he later married on October 1st 1965. They had 3 children Billy, Brenda, and Russel.

Brent was a member of the Church of Jesus Christ of Latter-day Saints where he served as a high priest.

Brent enjoyed farming with his brother Kent and also enjoyed playing “Church Ball”. Brent was happiest hunting and spending time in the mountains. Brent is survived by his wife Suzanne, his two sons Billy and Russel, nine grandchildren, his brother Kent and his sister June Wilson. He was preceded in death by his daughter Brenda Rawlings Bustos, his parents and six siblings.

Funeral services will be held on Wednesday, July 27, 2016 at 11:00 a.m. in the Fairview First Ward Chapel with Bishop Kip Rawlings conducting.  Friends may call Tuesday from 6-8 p.m. at Webb Funeral Home, 1005 South 8th East, Preston, Idaho and Wednesday from 9:30-10:30 a.m. at the church.  Interment will be in the Fairview Cemetery.  Memories and condolences may be shared with the family at www.webbmortuary.com

To order memorial trees or send flowers to the family in memory of Brent Merlin Rawlings, please visit our flower store.
Send a Sympathy Card