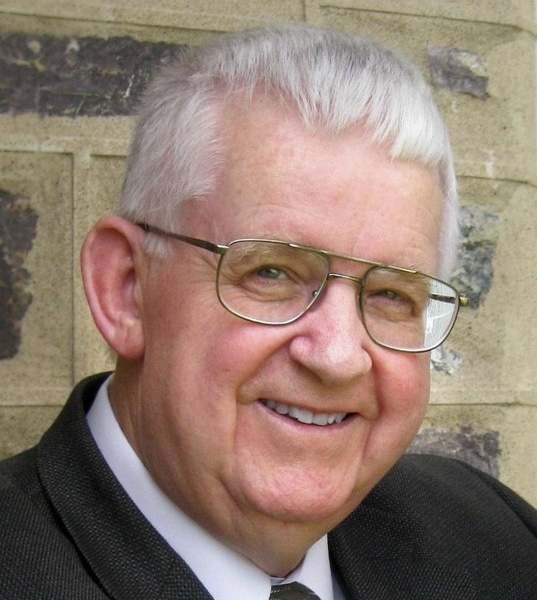 
Mike was born January 14, 1935 in Idaho Falls, Idaho to Harold Harper and Audrey Muriel Berger Holmes. He grew up in Victor, Idaho. At Teton High School Mike was a musician, dramatist, athlete, student publications worker, honor student, class president and student body president. He served in the Swiss Austrian LDS Mission for two and a half years.

Mike attended Idaho State College, earning a B.A. degree in German and Spanish and a B.S. degree in Secondary Education. He was an honor student and a ROTC cadet. At his 1960 graduation from ISC he was commissioned a second lieutenant in the U.S. Army. Mike taught at Blackfoot High School and at Brigham Young University where he earned an M.A. degree.

On June 17, 1960 he married Pauline Nash in the Logan, Utah LDS temple. They were married for 59 years and were the parents of two children, Curtis Nash Holmes (Kathy) and Michelle Holmes Thompson (Wes.) After Mike’s military service, they lived in Pocatello, Idaho for over 40 years. Mike worked for and retired from the U.S. Postal Service. He served in the LDS church as a home teacher, a ward choir accompanist, a bishop’s counselor, a high councilor and an officiator in the Idaho Falls temple.

Mike started taking piano lessons at age 10 and played the piano throughout the remainder of his life. At Idaho State College Mike accompanied and toured with the ISC Concert Choir for 4 years. He played piano in the orchestra that performed for “Carousel,” “Lil’ Abner,” and “The Pajama Game.” He accompanied the Silver Notes and Silver Chords in Pocatello. He played scores of piano solos and piano accompaniments in several parts of the world. He recently even entertained the residents at Maple Springs.

Mike will be remembered for his kind heart and for being unfailingly generous to many charities, friends and family. He loved family history and Idaho history. He authored several historical books. He dearly loved the LDS temples and studied everything he could about temples around the world. At the time of his death he was compiling information about the new Pocatello temple.

Mike was preceded in death by his sweetheart, Pauline. He is survived by his two children, four grandchildren, five great grandchildren, and two brothers, Garth Holmes and Blair Holmes (Margie.)

Special thanks go to the Maple Springs staff and Aegis Hospice for their thoughtful and dignified care of Mike.

A viewing will be held on Saturday, November 6, 2021 from 10-10:45 a.m. at Webb Funeral Home, 1005 S. 800 E., Preston, Idaho, followed by a graveside service with military honors at the Franklin Idaho cemetery. Memories and condolences may be shared with the family at webbmortuary.com

To order memorial trees or send flowers to the family in memory of Brent Michael Holmes, please visit our flower store.