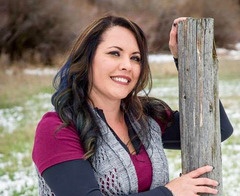 Betty Lou Pakootas Garvis Wolfley, “Bets”, returned to the loving arms of her Father in Heaven on July 9, 2016.  Betty was born on July 6, 1974 in Omak, Washington to Janet Pakootas of the Nez Pierce Colville tribe.  At the time she had many health issues that prompted Janet to bring her to the hospital where she met her mother, Muriel May Hackman Garvis, who nursed her back to health.  Betty was adopted and sealed to Michael and Muriel Garvis in the Cardston, Alberta Temple when she was one-year-old.

As a child Betty was actively involved in gymnastics and participated in many events.  While attending Star Valley High School Betty ran track and broke many records in long distance events.  She participated in several rodeos and fairs as a rodeo attendant.  After high school Betty trained as a beautician.  In 2010 Betty attended Eagle Gate College and received an Associate’s degree in Graphic Design.  As a cosmetologist she owned the USU Barber shop.

Betty will be remembered for her calm and thoughtful demeanor.  Her greatest joy was her family, especially her children.  She attended all their events, no matter the hardship.  She enjoyed the outdoors by hunting, fishing and camping frequently.  She loved singing karaoke and playing pool with friends.  She was an excellent cook.  Road trips brought Betty much joy and happiness and in the last month of her life she spent time travel several places across the country.

Funeral services will be held Wednesday July 13, 2016 at 5:00 p.m. at Webb Funeral Home, 1005 South 800 East in Preston. A viewing will be held on Wednesday from 3:00-4:30 p.m. at Webb Funeral Home. Interment will be in the Glendale Idaho Cemetery. Those wishing to donate for funeral expenses, please contribute to her Go Fund Me on Facebook entitled “Funeral Cost for Betty”. Memories and condolences may be shared with the family at www.webbmortuary.com

To order memorial trees or send flowers to the family in memory of Betty Lou Wolfley, please visit our flower store.