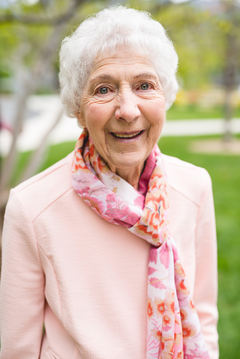 Barbara Renee Dunkley Allen celebrated her 85th birthday by returning home to her Heavenly Father and the awaiting arms of many family members, anxious to greet her on the other side.  Renee was born on December 19, 1930, in Franklin, Idaho, to Parley Briggs and Martha Almira Meacham Dunkley.  She was the bonus baby, joining her family of twelve brothers and sisters.  Her arrival into their home was the strengthening force that united two families, and she soon became the apple of everyone’s eye.  She loved animals of every shape and variety.  Her pets over the years included horses, dogs, cats, rabbits, and a ferret.  She spent many days enjoying the beauty of this world while riding her horse along the rocky bench above Franklin.

Renee met her husband, Winston Smith Allen, in 1948.  They were married on December 8th of that same year, in the Logan temple.  They were blessed with six children—three sons and three daughters.  Together they created a home that truly was a little piece of heaven on earth.

Her life was one of devotion to her family and to her church.  As an active member of The Church of Jesus Christ of Latter-day Saints, she faithfully served in many capacities throughout her life.  The highlight of this church service was her thirteen years spent alongside her husband as an ordinance worker in the Logan temple.

Renee was love personified, radiating the light of Christ to everyone around her.  All who entered her home were welcomed with love, acceptance, and a large slice of homemade bread.  Her greatest joy was being surrounded by her children, grandchildren, and great-grandchildren and ensuring that their stomachs and hearts were full.

Our hearts feel an emptiness with her passing.  She will be missed daily by her family, but we know that she will continue to have an influence in our lives.  Our goal now is to try to be as good as she believes us to be.  We know that we are loved by her beyond words and are secure in the knowledge that we are “hers forever.”

Funeral services will be held on Monday, December 28, 2015 at 12:00 noon in the Preston North Stake Center, 310 North State Street in Preston. A viewing will be held Sunday from 6-8 p.m. at Webb Funeral Home, and Monday from 10:30-11:30 a.m. at the stake center. Interment will be in the Dayton Cemetery. Memories and condolences may be shared with the family at www.webbmortuary.com

To order memorial trees or send flowers to the family in memory of Barbara Renee Allen, please visit our flower store.
Send a Sympathy Card