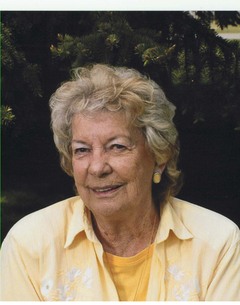 Ardis was born in Logan, Utah, April 25, 1933, to Virl D. and Vella B. Bronson, she was the oldest of three children. She was brought home from the hospital in a blizzard and was raised in Lewiston, Utah, and graduated from North Cache High School. In her earlier years she worked as a telephone operator for the Lewiston Telephone Company.

Her tall, dark, and handsome knight in shining armor, Alden James Drury, lived just a few miles from her in Fairview, Idaho, and they would signal each other by flashing the yard lights on the barns at night. They were married in Reno, Nevada, on June 26, 1951 and later sealed in the Logan, Utah, L.D.S. Temple. Together they had 3 children.

They lived in Blackfoot, Idaho; Brawley, California; and Kearns, Utah, before coming back to run the dairy farm in Fairview. Although times on the farm were sometimes tough, she always had fresh-baked bread and cookies along with milk from the dairy, and fresh produce from the garden. To help supplement the income she worked at  J.C. Penney, Chadwick's Dept. Store, and Carter's Dept Store in Preston, Idaho, where she met and made many long lasting friendships. She later worked at Del Monte in Franklin, Idaho, and Presto Products in Lewiston, Utah.

Ardis always had a big yard that was well maintained. Some people jokingly referred to it as a " park with a house in the middle of it". She was a meticulous house keeper and had her own methods of how things were always cleaned and kept immaculate. She would greet you with a smile and you would become her close friend.

October 14, 1995 Ardis married Tom Rowley in the Logan, Utah, L.D.S. Temple. Tom was a house-mover by trade and Ardis helped with his business, sometimes flagging traffic and one time even driving a house down the road.

Ardis was a faithful member of the L.D.S. church where she had served in the Relief Society, Primary, and was ward chorister for many years. Although her health prevented her from attending church services the last few months, she had a strong testimony of the gospel.

She was a member of the D.U.P, served in the presidency of the Saramar              Camp, and loved every moment of it. She loved to talk about it a lot and laughed and had lots of fun. She was also a talented violinist.

From her hospital bed in her house she would look forward to seeing the lights come on at night at the Cherry Peak Resort. They not only lit up the mountain but also lifted up her mood.

She was preceded in death by her parents Virl and Vella Bronson, step mother Rita Dalton Bronson, her husband Alden, her son Dennis, Her sister Margene Dobbs, her brother Thais "Tracy", her son-in-law Lee Lewis, and many brothers in law and sisters in law.

The family would like to especially thank Dr. Stuart Knapp and all the nurses and therapists at Franklin County Medical Center for their love and care, Home Health nurses for their help and care, Dr. Ali Ben-Jacob and the Cache Valley Cancer Treatment Center, and all her "chemo-buddies".

To order memorial trees or send flowers to the family in memory of Ardis Vella Drury Rowley, please visit our flower store.
Send a Sympathy Card