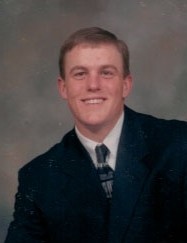 Anthony Blair Findlay, 38, returned to the arms of his Heavenly Father on March 24, 2018. Anthony was born on June 2nd, 1979 in Preston, Idaho to his parents, Blair and Nancy Findlay. Anthony’s arrival was an exciting time for his family, as they finally welcomed their first son to carry on the Findlay name. Although he was not the oldest, Anthony proudly took on the role of protecting his five sisters and younger brother.

Anthony loved being outdoors, especially in the mountains,  riding horses and riding mountain bikes with his brother-in-law, Travis, and his nephew, Zach. As children, Anthony and his brother, Ryan, spent countless hours together, enjoying fishing, hunting and building things.

Throughout his life, Anthony possessed numerous talents and gifts. He was very intelligent and loved his job as a Lead Signalman at Union Pacific Railroad. Carpentry, working with horses and being physically strong were important to him. Anthony and Karly shared a special bond. Countless hours were spent fixing her hair and dressing her up like a princess.

Anthony had a big heart and was adored by his nieces and nephews. As an uncle, he took his role very seriously, teasing, joking and interacting with them.

Funeral services will be held on Saturday, March 31, 2018 at 11:00 a.m. at the Thatcher/Williams Ward Chapel at 2060 Niter Bench Road, in Niter (Grace), Idaho. A visitation will be held on Saturday from 10-10:45 am also at the church. Burial will follow at the Liberty Cemetery in Liberty, Idaho. Memories and condolences may be shared with the family at www.webbmortuary.com

To order memorial trees or send flowers to the family in memory of Anthony Blair Findlay, please visit our flower store.