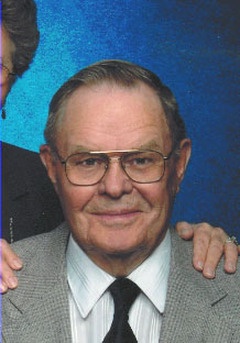 Allen William Lyon, 89, passed away Thursday, Jan. 14, 2016 at the Franklin County Traditional Care in Preston, Idaho. He was born October 26, 1926 in Preston, Idaho to Charles Leonard Lyon and Lula Palmer. He was the second child of six. He attended school in Morgan, Utah, and Bingham, Utah. In 1939, he moved to Treasureton, Idaho, to live with Melvin and Leone Kirby. He finished his grade schooling there.  He had completed 3 years of high school in Preston, Idaho. And on November 30, 1946, he joined the Army, to serve his country, in World War II. After serving for one year, he was honorably discharged because his older brother Melvin was killed in the South Pacific.

He married Wrena Carver on April 30, 1947, in the Salt Lake City Temple. They were blessed with six children: Gwen, Renee, Ross, Peggy, Janet and Merry. Wrena died on August 16, 1977. He met and later married Ardell Clegg Merrill on December 8, 1982. They were married at Incline Village, Lake Tahoe, Nevada.

Allen loved farming and was a farmer all of his live.  He always took great pride in the way his fields and crops looked.  He drove the school bus for 24 years for the Preston School District. He loved to read, play pinochle, hunt, fish and travel; they spent 21 winters in Yuma, Arizona.  He had stated that he wished he hadn’t waited until retirement to take up golfing and bowling.  He was a member of the Church of Jesus Christ of Latter-day Saints.

Funeral services will be held on Wednesday, January 20 at 12:00 noon in the Riverdale-Treasureton Ward in Riverdale, Idaho. A viewing will be held on Tuesday Jan. 19 at Webb Funeral Home from 6-8 p.m.  and Wednesday from 10:30-11:30 a.m. at the church. Burial will be in the Treasureton Cemetery. Memories and condolences may be shared with the family at www.webbmortuary.com

To order memorial trees or send flowers to the family in memory of Allen William Lyon, please visit our flower store.