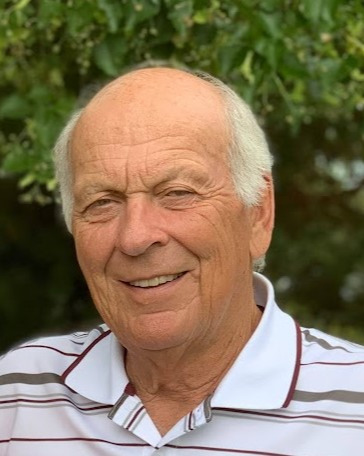 Alan John Vaterlaus, 84, of Boise, Idaho, passed away on December 17, 2022, from complications after cancer surgery.

Alan was born April 29, 1938, in the little Southern Idaho town of Preston. He joined his siblings Carl, MarJean, Elaine, and Rodney, with Valene coming later. He grew up on a farm and learned early the value of hard work and a job well done. He had a passion for sports, especially baseball. He and his brother Rodney, would throw rocks a long distance trying to hit the barn, dreaming of playing for his lifelong team the Cleveland Indians. His practice paid off and he was able to play baseball and softball for many years. After retiring, he was able to bat and play infield with the Indians on a trip to spring training in Arizona. They said they would keep their eye on him as a relief player.

He attended Utah State University and married JoAnn Wright in 1957. After leaving the university, he began his banking career with First Security Bank in Preston in 1959, staying with them for 42 years, until retiring in 2001. He began as a teller, worked in the Timeway Loan Division, and finished his career as the Senior Vice President over the Auto Loan Division. He had many great relationships with auto dealers across the state and was a great businessman that made First Security’s loan division profitable when other banks’ programs were not.

He had four children between 1958 and 1968, Vicki, Bret J, Jan Christoff, and Kristal Ann. They lived in Idaho Falls, Pocatello, and after several moves and promotions moved to Boise in 1973. These years were filled with many trips to the mountains, hunting, fishing, being a member of the Idaho Ski Patrol, and raising a family.

Later in life, after he and JoAnn divorced, he met his sweetheart, Sheryl Harris Vaterlaus. They were married in 1988 and were blessed with another daughter, Alyson Katie. He and Sheryl loved to travel and Alyson was a good sport on many adventures, including trips to Alaska, Mexico, Hawaii, and Europe. While working at the bank, he developed a love for golf, which he enjoyed with friends. He had a lifelong passion for hunting and everyone knew to find him at Kilgore in November. He made a lot of memories with his sons during those elk hunts and welcomed many to the experience. His hunting career included a trip to New Zealand with his son Jan bringing home a trophy tahr.

For many years he held an annual Grandpa Camp for the grandsons and even some granddaughters. He and Sheryl fed many teenage boys a lot of pizza and loved taking them hiking, boating, and to ride motorcycles. He taught his kids and grandkids how to fish, hunt, ski, drive, and push through hard things. He loved spending hours working at his beloved cabin in McCall.  He and Sheryl hosted many family reunions there and made countless wonderful memories that help us to hold him in our hearts.

In his retirement, he remained busy and active and was a full time Papa to his youngest grandchildren, Kyden and Saylor. He loved his annual golf trips with friends to Las Vegas, fishing at Polly Beamis Ranch, and his latest obsession, watching son-in-law Casey racing his sprint car at Meridian Speedway.

Alan loved Christmas and made it a magical time for his family. He will be sorely missed, but we know that he is happily singing carols and reuniting with his brother Carl, sister MarJean (Geisler) and parents, John Christoff and Lisle (Findlay) Vaterlaus. Even at 84, he was living life fully and fought cancer bravely. He was always active and even put up the Christmas lights on the house this year. He and Sheryl have touched many lives with their kindness and generosity and changed the world for the better. He was a  beloved Husband, Dad, Grandpa and Papa, Brother, Uncle, and Friend. Alan leaves behind his sweet wife Sheryl, and kids: Vicki (Vaterlaus) and Marc Brinkmeyer (Sandpoint, ID), Bret and Kristi Vaterlaus (Boise), Jan and Leann Vaterlaus (Boise), Kristal (Vaterlaus) and Jason Corey (The Dalles, OR), Alyson (Vaterlaus) and Casey Tillman (Boise), 18 grandchildren, 28 great grandchildren with more on the way. He leaves a legacy of strength, determination, love, and fun.

Services will be held Thursday, December 22, with a viewing at 11:00am and the funeral at 12:00pm at the Cloverdale Funeral Home in Boise. His burial will be at the Morris Hill Cemetery. The Family would like to thank his cancer and surgery doctors and nurses for their wonderful care and compassion. Memorial donations can be made in his name to the Rocky Mountain Elk Foundation or Sacred Heart School in Boise.

To order memorial trees or send flowers to the family in memory of Alan John Vaterlaus, please visit our flower store.